Beautiful January day. Sunny and warmed to a toasty 42 degrees.

Dad fed the cattle this morning. This afternoon Dad and Mom hauled the “green” wood from the yard trees which were felled yesterday. Thank goodness for the New Holland tractor with its large bucket. It made hauling this heavy wood so much easier. It will dry for several years before we burn it in the wood stove.

It was a satisfying day. 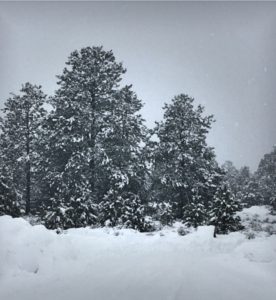 As I have been snowed into Central Oregon this past week, heeding travel warnings to stay off of highways if at all possible, watching the wood stack dwindle, as well as the horse hay, and fight ice dams, my Great Great Grandmother’s diaries got me thinking about the winters she experienced as a frontier’s woman.  The abundance of snow and cold temperatures presently bare many similarities to those of the late nineteenth century except they had no modern convinces or emergency services.

The year of 1889-90 was the year of the now famous hard winter.  What made this winter particularly hard was that the year of 1887 and 1888 were very dry and not much hay was put up.  These years used up all the surplus hay and grain, so stores were very low going into the winter of 1889-90.  During this winter many cattle died and lay frozen on the ground until late spring.  To minimize the loss as best they could, the cowhands skinned the carcasses for sale at the thriving hide market.

What follow are excerpts from The Siskiyou Pioneer Historical Book, Butte Valley Edition I (1957) & II (1977).  As I reread these books, I am so thankful for the people who took the time and energy to record this oral history.  As now it has been forgotten, and only a few great grandchildren of the pioneers now in their 60’s & 70’s remember some of the handed down stories of that winter.  My dad remembers his Grandma Minnie Otto Truax who was born December 14, 1889, telling about the winter in which she was born. Her mother, Nellie Young Otto, always said that winter there was 4 foot of snow on the level. She remembers this because she would look out her bedroom window and the snow was level with the windowsill.

“The year of 1887 was very dry; the crops of all kinds were short.  The following year was dry and not more than a half a crop raised, scant enough to carry the stock through the winter, but there was no unusual loss.  During these two years of shortage about all the surplus hay and grain had been consumed.  The summer of 1889, there was about half enough hay and grain raised to carry the stock safely through the winter.  The death of cattle was great.  Deep snow fell, fences in many places were covered over and many places were impassible on account of deep drifts.  Stock would disappear under snow drifts and not be found until the spring.  Thousands of head were lost.”

“The hard winter of 1889-90 started with a snow around December 10th.  On the level the snow was 3 feet deep and stayed until February when it started to rain and flooded the country.  Thousands of cattle, horses and mules died that winter.  I’ve seen horses’ tails and cows’ ears frozen off, and the temperature at 31 degrees below zero.  Chickens would freeze to death right on the hay.”

“Three feet of snow fell and it was 30 degrees below zero that winter.  The only means of transportation over the mountain, or elsewhere, was by snow boat with horses hitched single file, or by horseback.  Horses were almost out as far as travel was concerned for any distance much more than a few miles.  Stockman were heavy losers that winter.”

Page 45, The Siskiyou Pioneer Historical Book, Butte Valley Edition I (1957),  recorded oral history of Julius Russell (he was 32 years old in 1889-90, he also had a son born December 17, 1889 and he became known all over as the Hard Winter Boy) , oral history recorded by his daughter who was  8 years old that winter.

I expect this winter was especially memorable and sad for my family and could be why the decision to travel to Little Shasta prior to giving birth, was made by my Great Great Grandmother Mary, unless that was standard practice.  1889-90 was the winter Maggie, (Margaret Combs) Mary’s sister’s husband Charles Boyes died at age 45. 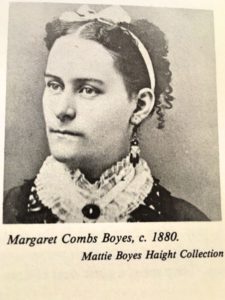 “Charles and Mary had been on a business trip to Los Angeles. Upon returning home and finding the severe weather and lack of hay, Charles made a desperate attempt to save his cattle and horses by breaking trail over Ball Mountain.  He developed pneumonia during his battle over the mountain.

Word was relayed by horseback riders to Dr. Ream in Yreka that Charles Boyes was very sick and was in need of his services at once.  Dr. Ream stated that if three riders could get over the mountain to get word to him of Mr. Boyes’ illness, then he could get through in the trail broken by these riders.  Leaving immediately after receiving the news, Dr. Ream rode as hard as possible the 30-40 miles to aid the Boyes.” (I imagine that three riders went, each taking turns to break trail & then drop back to let their horse recover.) 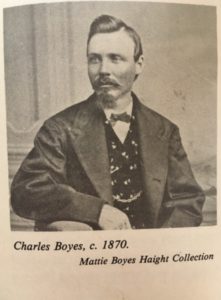 “Arriving at the ranch, Dr. Ream found Mr. Boyes very ill and stayed with him.  That night the horse he had ridden died.  When Charles Boyes found out about the death of Dr. Ream’s horse from the hard trip, he told the doctor that he had a very fine roan horse he himself always rode. The horse was big and tough and he wanted the doctor to have him for coming to his aid through the snow. The doctor was always to have a horse from the Boyes ranch as long as he had to ride out of the town of Yreka to administer to the sick.  Dr. Ream stayed at the ranch for several days, but his efforts were futile and during that time Charles died.  The doctor returned to Yreka with that fine roan horse and was furnished a horse from the Boyes until he died.

Charles Boyes died at the age of forty-five, Monday January 27, 1890.  He left behind his wife Maggie, a baby born two months after his death, and seven older children.”

Page 98, The Siskiyou Pioneer Historical Book, Butte Valley Edition II (1977),  recorded history  by my Aunt Kathy for a high school assignment in May 1965 ,  granddaughter of the Boyes’ nephew, John Laurence Truax,  who was  3 years old that winter. 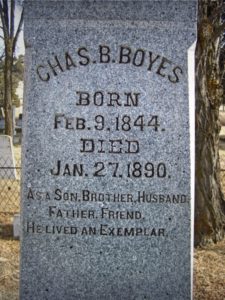 The winter of 1889-90 was remembered as one of the worst winters, but it has been said that the winter of 1894 the snow was even deeper.  People and livestock faired better because the years prior had not been in a drought.*  But who would want to risk having to break trail over a mountain 30-40 miles to get a doctor?  So Mary was moved closer to the doctor to await the birth of her last child, away from her husband and other children who had a ranch to tend to in the deep snow.