Our family has been in Siskiyou County for seven generations and started raising livestock after the gold rush in Yreka settled down.  The operation remains small enough to be worked by the family with no hired help.  It is not a business that is owned by a family and worked by other people.

The current cattle herd can trace their ancestors back to the original foundation stock of the 1870s.  The herd may not be a registered heritage breed but they are our heritage and have adapted to perform well on what the ranch can provide naturally.  They are thrifty.  The cows have evolved to calf without assistance, be protective, nurturing  mothers, thrive on rangeland forage with minimum supplemental winter feed and still produce a high quality product.

As the homestead was being established in the late 1800’s the majority of the cattle were Durham, a dual purpose breed, similar to milking short horns able to produce both milk and meat.  My Great Great Grandmother recorded in her diaries how they milked them and made and sold butter.  After the railroad came through in the early 1900’s they started to focus collecting the cream and shipping it via rail to the Creamery in Weed.

When my Great Grandparents started to work in they incorporated Herfords into the herd, an efficient, adaptable and hardy breed.  The next generation introduced angus bulls to the herd and a small amount of Brahma blood for increased hardiness and drought resistance.  Through centuries of exposure to inadequate food supplies, insect pests, parasites, diseases and the weather extremes of tropical India, the Brahma cattle developed some remarkable adaptations for survival that we found to be applicable in the lava rocks of the high desert environment North of Mt. Shasta.

The current working generation has maintained the herd and introduced Charolais Bulls related to the migration into the alpine rangeland near the base of Mt. Shasta.  Charolais are suited to this area because they can thrive in changeable weather throughout the year with the help of their adaptable coat. They maintain a longer, thicker coat of hair in colder winter months, but shed into a sleeker, shorter coat as the weather warms in the summer. Since Mt. Shasta has temperamental weather, the ability to thrive in an unusually harsh winter or hot summer is a good advantage.  The hooves of Charolais cattle are very sturdy, making them suitable for uneven or rugged and rocky terrain.

Some think the temperament of Charolais cattle is a disadvantage. The cattle are known for aggressive tendencies. Since their protective mothering instinct is quite strong, the cows can be risky to deal with when their calves are nearby.  But here at Mt. Shasta Wild we think of this as an advantage since they forage in the wild.  With the return of more apex predators their temperament enables us to be a predator friendly producer because our mother cows are willing to stand their ground rather than flee, leaving vulnerable young behind.  Another reason why they are unpopular with conventional producers and producers that have started out during the time of the popular polled (born without horns) Black Angus is that they are naturally horned.  Horned cattle that are confined to small areas or forced to run in close proximity to each other can injure themselves.  Since our cattle are allowed to forage thousands of acres it is not a concern but an advantage related to the confidence it gives then to stand their ground and protect their young.  It is not that they injury or fight predators with their horns that increases their survival but their willingness to bunch together and stay with their young.  Research has shown that predators will not aggressively attempt to attack prey animals that stand their ground but prefer animal that flee and do not stay in a herd.

Raising cattle efficiently, effectively and appropriately at the base of Mt. Shasta did not happen by accident  or quickly during a generation or two.  It has come from familiarity and knowing the history of the area.  Living on the land that you know multiple generations of your family has lived on does not only have sentimental value, a family that has lived off the land through multiple generations possess not just the tittle to the land but a remembered history of its mistakes and the way those mistakes were sorted out.  It knows what the cattle and the environment are capable of and what they are not.  This is the history and knowledge that has led to the development of a genetically diverse Cow, that is hardy and uniquely adapted to the wild foraging available near Mt. Shasta.

To learn more about our family history click on the Our History tab. 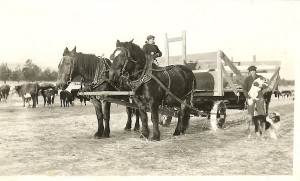 The 3rd generation in the mid 1940s while the 4th generation was away fighting WWII.  The team driver is my Great grandmother.  I like the fact that even in the early generations the women were hands on with the cattle.